Home » Blog » Do Tall People Get More Back Pain?

Do Tall People Get More Back Pain?

One of the most commonly espoused causative factors of lower back pain is height. If you are tall and have a bad back, chances are you have been told your height is to blame at one point or another.

But does being tall mean that you are more likely to have a bad back? And what does the science say?

Fortunately Gloucester Chiropractors are on hand to explain!

Whether you are 5ft 2 inches or 6ft6, you have the same number of moveable segments in your spine at twenty four. It should come as no surprise that the size of these segments changes from person to person, with taller people have larger vertebrae.

Despite thicker and larger vertebrae, there is a relationship between being tall and experiencing more back pain.

Although there are some conflicts in research on this topic, the general consensus is that you are about 1.5 times as likely to experience back pain if you are tall than if not.

Major problems exist with making these statements; what constitutes tall, for example.

However, although reasons for the relationship between height and low back pain are not well understood, there does seem to be a certain amount of logic to this idea.

Longer limbs mean longer levers, and although vertebrae are larger in terms of height, there is not always a proportional increase in width, making it harder for core muscles to resist the effects of long levers.

The amount of torque generated by longer limbs could be a key factor in why taller people may experience more back pain than their shorter peers.

More torque makes it harder for your torso to remain still when you move your limbs, leading to small movements that can irritate, or eventually damage, structures within the spine.

In addition to potential anatomical causes, clearly there are circumstances where ergonomics do not favour taller people.

Cars, planes, supermarket trolleys, kitchen work surfaces, sinks and so on, the list of places where tall people have to adapt their posture or movement to the situation is a long one.

If being tall means stooping slightly whilst doing the washing up, it follows that there should be a slight increase in the risk of lower back pain.

A problem with making statements such as being tall predisposes you to back pain is that a feeling of inevitability may prevent taller back pain sufferers from seeking treatment.

It is possible that taller people may resign themselves to a certain amount of back pain in the belief that their height is to blame.

In this instance, tall people may be putting up with pain that could be easily resolved.

The good news is that there is no research suggesting that tall people are less likely to respond to treatment for lower back pain.

Our advice to tall people is not to worry about an increased likelihood of low back troubles, but to embark on an approved exercise regime to fortify the muscles that safeguard the spine.

We can say that being tall comes with a higher risk of low back pain, but that this risk can be mitigated by strengthening the muscles around the spine and improving mobility of the hips and shoulders.

With good mobility at the hips and shoulders, activities like bending and reaching are more likely to take place at these joints, taking the load off the spine.

Just beware, strong muscles around the spine doesn’t mean loads of sit-ups or a bulging six-pack is good for you.

Core strengthening exercises should always focus on holding postures against resistance, rather than generating movement.

A good example of this principle is planks versus sit-ups.

They both work your abdominal muscles, but sit-ups put you into a poor posture at the point you are exerting the most effort.

That’s a recipe for disaster.

Whereas planks place you under load in a neutral posture, which is much better for your spine. And just as good for your six-pack! 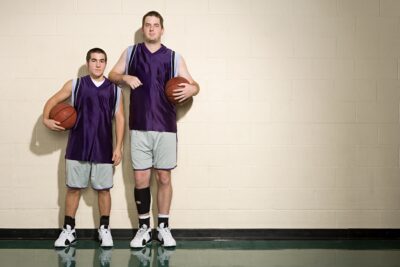